At work, Ian’s team work closely with a Manchester based charity called Stockdales.  They have been providing care and support for adults and children with learning and physical disabilities since 1953.  One of our aims at Axe Edge Green Farm is to establish relationships with such charities and schools to enable adults and children to have a hands on experience with our animals.  On 27thJuly 2018 we invited Stockdales to our first ever smallholding day! 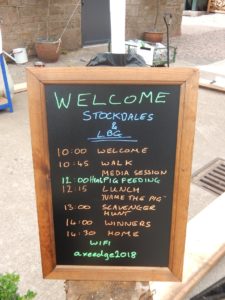 The summer of 2018 was certainly a hot one.  It was so dry in our valley that the sheep had learned to hurdle the cattle fences to chew on the tiniest strands of green grass available on our track.  The marquee had been set up the night before to act as either a safe haven from the sun or, albeit less likely, the rain.  Food and drink to accommodate all tastes was laid out,  as were reusable plates, cutlery, welcoming balloons, signage and recycling bins.

Despite Agnieszka’s worry that there didn’t appear to be any plan or organisation, Ian’s tiny brain cells were actually working very hard indeed. Ian’s work colleagues also planned their annual away day at our farm to coincide with our smallholding day to help and mix with our friends from Stockdales.  The events of the day were to prove to be a genuinely a heart-warming and fun day for all concerned….

Due to the size of the marquee (which the guests in our holiday cottages helped erect) and the fact that we’d been asked the previous day if we could accommodate two groups from Stockdales and their minibuses, Ian had arranged for his colleagues to park either at our neighbours’ or the village car park.  At 7am the first of the troops began descending the hill to witness the ‘umble abode where their esteemed colleague, Ian, actually lived.  It’s fair to say that his colleagues were in awe. 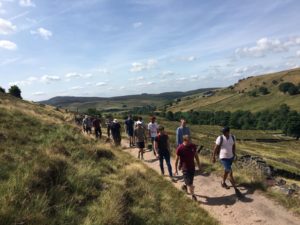 After coffee and biscuits Ian took his colleagues on a walk to Three Shires Head via the old pack horse track which everyone enjoyed but not half as much as the sight we witnessed when we wearily returned (it’s only a short walk, but it was rather hot…).  Ian had arranged for a tractor from our neighbours at Knobb End Farm, it was pig feeding time and as Ian crossed the stile into our field was met by a wall of laughter, screams and fun.  People were everywhere: in the pig paddocks, playing on the tractor and quad bike, sitting on bales of straw in the garden, eating, drinking, laughing and happiness all around.  All the hard work had paid off. 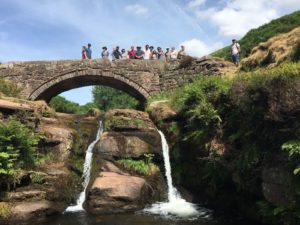 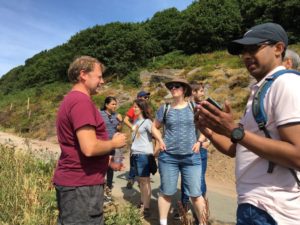 A Stockdales’ service user, Gail, won the “name the pig competition” and upon winning name, Alma, being drawn. Gail broke down in tears of happiness as she was presented her certificate as did almost everyone who was watching her.  Stockdales captured our hearts.  We also had a mini treasure hunt and photography competition but the day was passing far too quickly.  To top it all, we had arranged for one of our neighbours to bring his 1935 Riley and everyone’s jaws dropped in awe as John drove down our track. 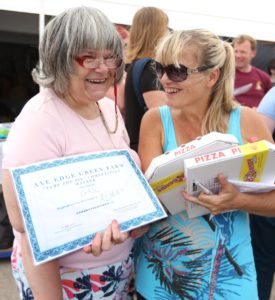 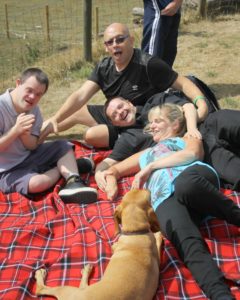 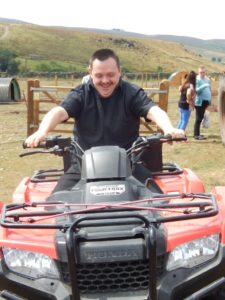