Tamworth is a rare breed that is considered to be Britain’s oldest pure breed which is similar in
appearance to the Old English Forest Pig. There are different theories as to how the breed originally
developed with one theory being the breed was influenced by the import of red pigs from Barbados.
Having said that, of all the native breeds the Tamworth experienced the least influence from imports of
Asian pigs during the 18th and 19th centuries.

Tamworths are considered a medium-sized porcine breed, with a full-grown boar ranging from 250 to
370 kg and the mature sow from 200 to 300 kg. According to The British Pig Association there are only 300
sows (we have 2 of them), and only 100 boars registered in the UK (and we have our Henry).

At Axe Edge Green Farm we breed our Tamworths for meat and to sell them for further breeding. Our
Tamworths are pedigree pigs and Henry, the boar, is of the Royal Standard blood line.

The gestation period (pregnancy) of a Tamworth is easy to remember: 3 months, 3 weeks and 3 days.

Our holiday cottages guests have watched piglets being born, helped with moving the pigs from one paddock to another
and with feeding. It is always very entertaining to watch pigs, regardless of what they are up to!

Above: Maple basking in the sun with her piglets in July 2019. 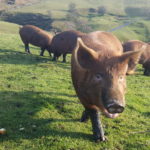