The Tamworths have now cleared the whole area of everything but stone and mud. It’s now time to move them so we can build a polytunnel. Also, Henry the new Tamworth Boar didn’t wait when he was introduced to the ladies so we will be having Tamworth piglets in approx. 3 months’ time.

I must admit when I finished building the ark it was HEAVY. I treated the pigs by giving them a wooden base to lay on, as opposed to the ground which added to the weight considerably and despite the sledge affair that supported it all, the ark was completely unmovable. A tractor may have pulled it out of all the mud (or pulled the whole thing apart), but when we tried towing the ark with our 4×4 ATV – the ATV just sat there spinning its wheels, spraying pig muck and mud everywhere 🙂

I had actually built the ark so it was relatively easy to take off the galvanised steel roof, thus halving the weight, but this too proved problematic as there was so much compacted straw and mud inside the ark, it was again impossible to remove the roof without taking the whole thing apart. What should have been an hour’s job ended up taking all day.

Will the ark move?

The Tamworths are too interested and keep getting in the way. 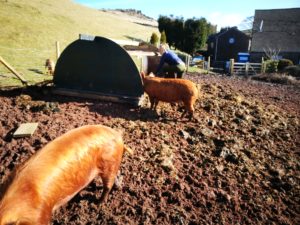 A morning later and all is ready to move…..time for a quick lunch.