After our ducklings had hatched we didn’t feel as though we could put them outside straight
away. Also, we were in the midst of winter and the “Beast from the East” was hitting us hard
with temperatures dropping to -10 C and snow drifts everywhere. We had to keep the ducklings
warm so we boarded off a section of a utility room inside the house by the oil-fired boiler.

It was surprising how accurate nature was and only two weeks after candling the eggs, the
first started to hatch. It turned out that only 4 of the 6 eggs were fertile and within 2 days we
had 4 perfect Indian Runner Ducks. Sadly, one of the ducklings subsequently died which was
actually quite heart breaking seeing something you’d nurtured just laying there, all motionless. 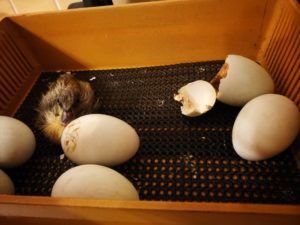 After a few days we gave them a small pool in the form of an unused
paint roller tray. They literally did take to their pool like “ducks to water”. 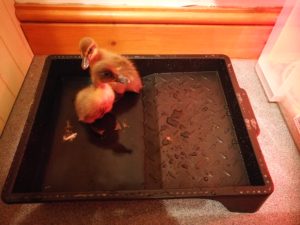 The ducklings were growing at an amazing rate and after only 3 weeks they were beginning to
outgrow their secured area. Also, they created such a mess and stench too! It’s funny, looking back,
we’d tidy and clean their pen and within an hour there would be mess everywhere… Poop in food,
food in their water, water all over the place, poop everywhere, we couldn’t wait to get them outside! 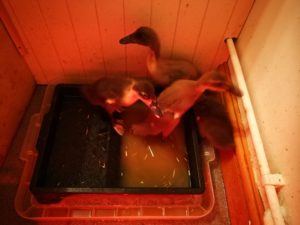 We gave the ducks an introduction to the outside world by keeping them outside during the day in
an old chicken run we had. The Indian Runners are a very timid duck so we wanted to keep them
in one place without having to stress them out when we returned them inside each night. One
thing was for sure, after only 5 weeks they were already out growing their pen in the utility room! 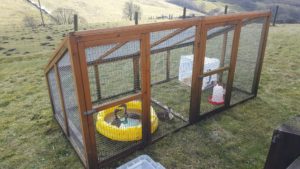 A hurried weekend was spent building a new pen for the ducks. They’re not too sure of the
pond yet but last night they did return to their home before dark which was unexpected.