Runner Ducks at the farm 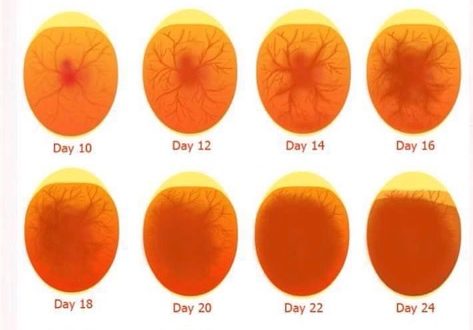 We’re very lucky (whilst there isn’t a bird-flu type lock down) as we already have wild ducks, partridge, grouse,
pheasant and a plethora of other wild birds around the farm. After visiting one of the many agricultural shows in
the area we decided we’d like to have ducks and chose to have some Indian Runner ducks.
Incubating

Rather than buy the chicks we decided we’d like to hatch them ourselves so we borrowed an incubator and
bought some fertile duck eggs from a seller on eBay. True to form the duck eggs arrived in an egg box –
wrapped in polystyrene and all the eggs arrived undamaged via courier. The 6 duck eggs cost around £25
delivered but the cost of the incubator was a bit of a shock – over £250 for a decent one. My wife had ordered
a mini incubator via eBay for about £50 from China which worked when it arrived but was far too small to hold
any ‘normal’ sized eggs. The one we borrowed was more like a box which worked well as, with hindsight, we
ended up keeping the hatched chicks in the incubator for a few extra days whilst they gathered their strength.

After a couple of weeks we tried candling the eggs with a bright torch. Our initial attempt was a failure as to
be honest we didn’t know exactly what we were looking for – I was looking for a perfectly shaped shadow of
a chick that you’d see in a 1970’s Warner Bros cartoon ! I found a very l e n g t h y but informative video on
You Tube where an American lady took you through the process and told you exactly what to look for. On our
second attempt at candling after watching the video – there it was….. You could see blood vessels and an air
pocket inside 4 of the 6 eggs – we had 4 ducklings on the way!!!

I’ve copied a chart from the Web below – it’s amazingly accurate. Pictures of our Indian Runner Ducklings will
appear in Part 2 of this blog! 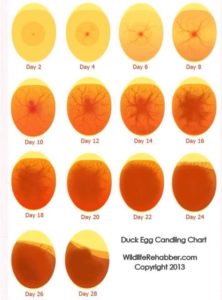